IOTA is still climbing today, adding to its recent gains. This comes at the same time as many of the top virtual currencies drop in value—specifically, Bitcoin (BTC), which is now well below the $8,000 mark. However, it’s good news for MIOTA. This is because the altcoin and organization have had a bit of a slow month. At least on the market and on the announcements front.

IOTA (MIOTA) is currently selling for $1.87. This puts MIOTA up 5.02% in the past twenty-four hours. The climb comes after a month of volatility. On May 3, MIOTA hit $2.59. After that, IOTA followed a downward trend. 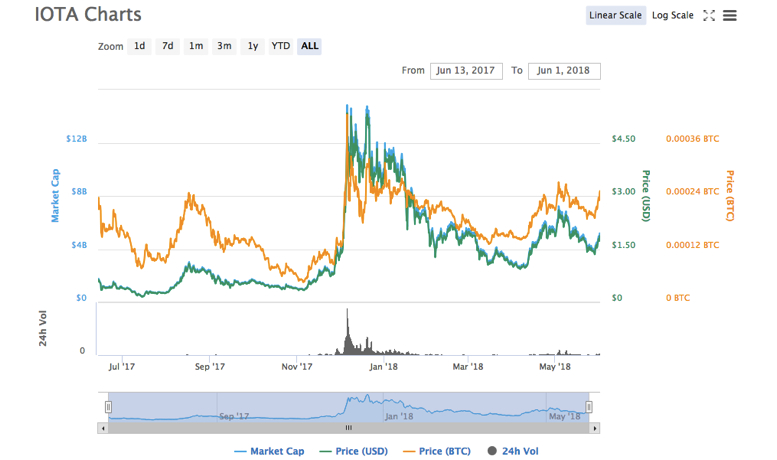 Since May 28, IOTA (MIOTA) has increased more than 40%. This is because of the release of its highly anticipated Trinity Mobile Wallet.

Before we get to today’s news, let’s look at what was announced earlier this week. On May 29, the company announced the beta release of the Trinity Mobile Wallet application; this is a user-friendly app, with three different modes and two-factor authentication. 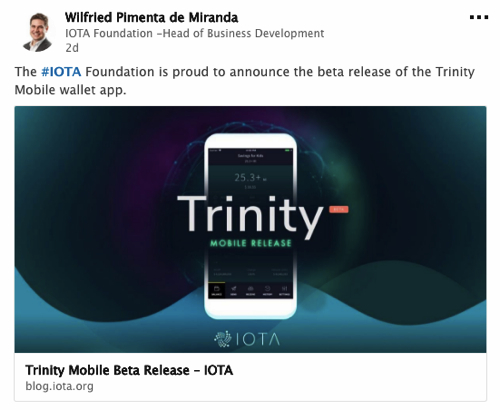 The response to the news was positive. Many reiterated just how long they had been waiting for the Trinity Mobile app:

Word has surfaced today that the organization has partnered with DNB ASA. For those who don’t know, DNB is Norway’s largest financial services firm, hence why this is trending news. The news was announced yesterday but took flight today. The two will be exploring the applications that make up the Tangle.

#NB is #Norway’s largest financial services group and one of the largest in the Nordic region in terms of market capitalisation. The Group offers a full range of financial services, including loans, savings, advisory services, insurance and pension products. #IOTA #Tangle #DNB pic.twitter.com/UHC67YulAv

Moreover, it was also announced that the company has been working with Nordic Semiconductor.

We together with NTNU have worked with IOTA Foundation to explore the potential from #NordicThingy and #IOTA combined https://t.co/I5c6NLOPLo

How do you feel about the company making a comeback this week? Do you think it will last? Or will it go back to following a downward trend? Let me know what you think, and don’t forget to check back in next week for more news!